New York City’s subway system shuttles over 1.7 billion people around the city every single year. While I’ve used most subway lines at least once and I can comfortably tell you which stops sit at the end of the 4 and 5 lines (my home routes), I really don’t know much about the end of line stations. Few people do. I naively assumed that these stations were outposts in barren waste lands- places that only the brave or stupid would ever choose to live.

Turns out- some of them are pretty cool.

William and I decided to start our exploration at the most popular end station, Flushing-Main Street. Despite its distance, Flushing-Main Street is the 13th busiest station in the MTA system with over 60,000 people passing through it each weekday (source). It is the last stop on the 7 line, which runs from 34th Street-Hudson Yards in Manhattan to Flushing-Main Street in Queens. To ride the line from one end to the next would take approximately 40 minutes. 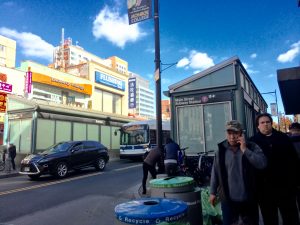 Within Queens, the 7 transitions to an elevated-rail line with clear views over the tops of residential and commercial apartment buildings. You can gradually watch as the dominant language shifts from English, to Spanish, to Mandarin and Korean as ads are plastered across billboards and storefronts. Finally, the 7 descends back into the Earth and pulls to a stop at the station where riders are kindly, but firmly, instructed to evacuate the vehicle.

Any assumption of calm is immediately thrown into chaos as you make your way above ground into one of the busiest shopping neighborhoods in New York. The crosswalk of Roosevelt and Main Street is the third busiest intersection in the entire city falling behind only Times and Herald Squares. Flushing’s Chinatown is the second largest Chinatown outside of Asia and will likely surpass New York’s Manhattan-based Chinatown in a few years (or at least that’s what Wikipedia says). 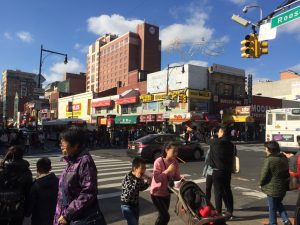 At 1 in the afternoon, my patience for “brunch” (seriously, if you are eating after usual lunch time, I think New Yorker’s should forfeit the right to combine the word with breakfast) was running thin, and so we made our way to Daily Waffle. Daily Waffle is a simple storefront that sells a variety of sweet and savory waffle combinations. We both ordered a Chicken Waffle Sandwich on thin waffles for $6. Smothered in syrup and dusted with sugar, the dish certainly falls on the sweeter side of sweet and savory, but for the price and simplicity- the taste was fantastic. Even the most expensive dish on the menu would only put you back 8 bucks- nearly unheard of in one of the most expensive cities in the US. 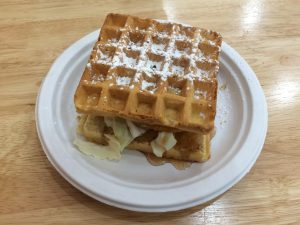 After “brunch” we wandered the streets just long enough for me to become convinced that I should never pay for Chinese food anywhere else. The prices in Flushing were heavenly and the multitudes of local patrons seemed to imply authenticity.

We decided to take the 7 one stop back to Mets-Willets Point, thus named for the Citi Field’s home team- the Mets. While the stadium sits to one side of the tracks, opposite it sits Flushing Meadows Corona Park. The fourth largest park in the city, it was developed to host the 1939-1940 World’s Fair. It currently houses the US Open Stadium space, the Mets Citi Field, the Queens Museum, and a number of other cultural institutions. 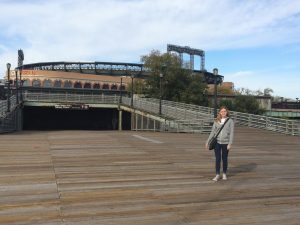 As you can imagine, I was most enthralled by the giant Stainless Steel globe. A popular place for wedding and senior photos, I took no less than 30 photos of myself. 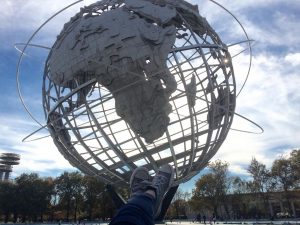 After stroking my vanity, we wandered into the Queens Museum (suggested donation is $8, NY Students get in for free). The museum displayed the work of Mierle Laderman, a performance artist who worked as the artist-in-residence for the Department of Sanitation for several decades in the late 1900s and a hodgepodge of Tiffany Lamps (I know, I know, I’m uncultured). The most incredible piece was their panorama of New York City. The 9000+ square feet space perfectly laid out each of the boroughs in excruciatingly exact detail. Who knew Staten Island was so huge? 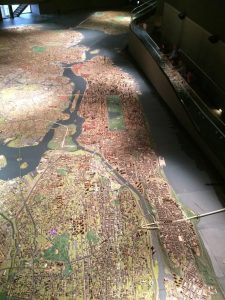 After the museum, we decided to head back to Flushing-Main Street to visit Nan Xiang Xiao Long Bao. Nan Xiang Xiao Long Bao is most famous for its soup dumplings, but also offers a number of pan fried dumplings and noodle dishes. We ordered the pork soup dumplings, pork pan fried dumplings, and pork and crab soup dumplings. Soup dumplings are quickly becoming one of my favorite things- even though they completely baffle me. You first pop the dumpling so the soup-y liquid spills into a spoon, you drink the soup, and then eat the remaining dough and meat. It’s difficult to eat, but highly rewarding for a soupie (that’s a soup foodie right?) like me. 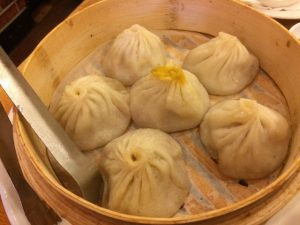 Finally, we made our sunset journey back into the city to conclude our 7 train adventure.

If you’re looking to visit an edge of the city you’ve never seen but don’t want to end up stranded in the ether- Flushing, Queens is the perfect station to start with.

« Tears for Fears: My Move to NYC
How to Adult: A Personal Checklist »